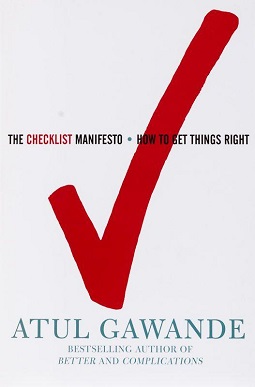 A while back I mentioned Atul Gawande‘s book The Checklist Manifesto. Today, I got another example of how to improve my checklists.

The book talks about how checklists reduce major errors in surgery. Hospitals that use checklists are drastically less likely to amputate the wrong leg.

So, the takeaway for me is this: any checklist should start off verifying that what you “know” to be true is true. (Thankfully, my errors can be backed out with very little long term consequences, but I shouldn’t use this as an excuse to forego checklists.)

Today I was testing the thumbnailing of some MediaWiki code and trying to understand the $wgLocalFileRepo variable. I copied part of an /images/ directory over from another wiki to my test wiki. I verified that it thumbnailed correctly.

So far so good.

Then I changed the directory parameter and tested. No thumbnail. Later, I realized this is to be expected because I didn’t copy over the original images. So that is one issue.

I erased (what I thought was) the thumbnail image and tried again on the main repo. It worked again–I got a thumbnail.

I tried copying over the images directory to the new directory, but it the new thumbnailing directory structure didn’t produce a thumbnail.

I tried over and over with the same thumbnail and was confused because it kept telling me the same thing.

I added debugging statements and still got no where.

Finally, I just did an ls on the directory to verify it was there. It was. And it had files in it.

But not the file I was trying to produce a thumbnail of.

The system that “worked” had the thumbnail, but not the original file.

One thought on “Rule #0 of any checklist”