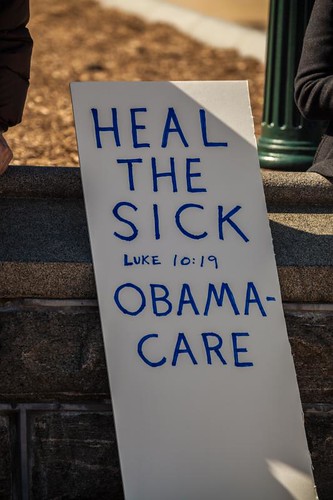 As October 1st and the possibility to sign up for Obamacare gets closer, the world has had the dubious pleasure of watching American politicians fight over the best way to care for the those who can’t afford medical care.

The great thing about America is our federal system: As a federal program, Obamacare depends heavily on each state’s implementation of it. States whose legislatures and governors are politically sympathetic to the program (i.e. mostly Democrats) are doing everything they can to help it succeed. They’ve accepted increased Medicaid funding, set up state-run exchanges, and hired navigators to get things done.

But legislatures and governors who aren’t so politically sympathetic to Obamacare (i.e. mostly Republicans) aren’t content to let the program fail on its own — though many are convinced that it would. Instead, they are trying to block implementation at every step.

They often use the argument that the federal government can’t do anything right, but then, when Obamacare offers states the more Medicaid funding and the chance to run their own insurance exchange — after all, something run by the states is better than if it is run by the feds — they balk and leave their citizens to rely on the Federal implementation.

Obamacare recognizes that people will need help figuring out the new system, so part of it is the implementation of navigators in each state. In Florida, though, the state has passed legislation saying that navigators do not have access to their county health facilities.

I understand that some people don’t want Obamacare to succeed. Heck, they don’t even want people to get any benefit, because “when people get an entitlement, they never give it up, so let it burn.” I get that.

But trying to create failure by blocking access to Obamacare creates “bad optics” at the very least. Thankfully, some counties in Florida have found a way around the state’s ban on helping people enroll in Obamacare, but this only adds to the drama. It may even, indirectly, make the point that those closer to the individual are better able to serve than “those bureaucrats in Tallahassee”.